Uncertainty about the benefits DHA

[FONT=verdana, arial, helvetica, sans-serif]Uncertainty about the benefits of dietary docosahexaenoic acid (DHA) for pregnant women and their children exists, despite international recommendations that pregnant women increase their DHA intakes.

[/FONT][FONT=verdana, arial, helvetica, sans-serif] The use of DHA-rich fish oil capsules compared with vegetable oil capsules during pregnancy did not result in lower levels of postpartum depression in mothers or improved cognitive and language development in their offspring during early childhood.[/FONT]
Click to expand...

The Journal of the American Medical Association

Well, just turning out normal these days is a success I would say. Personally I dont trust a dang thing the JAMA says. Anything they offer must be verified or discredited though other sources that do not have pharmaceutical interests attached to them

I think that taking omega 3 fish oil specifically for the purpose of avoiding postpartum depression is a 'reach' for this supplement anyway.

Although fish oil supplementation has been shown to be helpful in those showing signs of depression, evaluating it for that purpose after pregnancy isn't reasonable, with major hormone fluctuations, elevated emotions, etc.

I'm not sure about the scale system they use to judge the cognitive benefits, etc. for the babies involved, but personally I don't get a trusting feeling about it.

Aside from the expectation for fish oil to cure postpartum depression, I think that it's very valuable for both mother and child. Here's an older post of ours on the subject.

In a situation, such as the UK or the USA (and probably Australia but I don't actually know what the average Omega 6 omega 3 ratio is in Australia) I'm guessing it's probably somewhere between UK and USA which are between 20 and 30 times too much omega 6 in proportion to omega 3, if anyone wants to benefit from omega 3 supplements such as DHA they first have to lower the amount of omega 6 in their diet.
They then have to grasp the simple idea that the half life of omega 6 once in the body is about 2 yrs. So eliminated additional industrial seed oil consumption for 2 yrs while maintaining a high omega 3 intake will result in halving the 30 <> 1 omega 6 to omega 3 2 yrs later to 15 to 1
and 4 yrs after you'll be down to 7/8<> 1 omega 3 and will at bit of luck and persistance after 5 yrs you'll be about the level omega 3 is NOT BEING DISPLACED by excess omega 6.
Stephan at wholehealthsource has a graph of omega 6 levels in human breast milk.
It's shows human breast milk in 2005 in the USA was around 15 times too high in omega 6, it's probably worse now. Anything over 5 is bad news. It's no good thinking a few omega 3 capsules at that level is going to have much impact without eliminated omega 6 industrial seed oil intake at the same time. 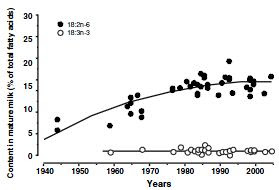 If you wanted to see the effects of improved omega 3 status then you need to have reduced omega 6 status at least 2 years before the trial and preverably 5 years before you become pregnant.

Imagine if you were deeply in debt and someone gave you a small amount of extra money each day. While you have such a huge overdraft the interest payments and bank charges are so huge that wipe out the benefit of the small amount of extra money daily. We wouldn't say having more money doesn't help, it's just when the situation is so dire more extreme measures are required to retrieve the situation. So with omega 3. While the person consuming it is still consuming omega 6 the effect of the omega 6 is continually overwhelming the impact of the omega 3 supplement.

"They then have to grasp the simple idea that the half life of omega 6 once in the body is about 2 yrs. So eliminated additional industrial seed oil consumption for 2 yrs while maintaining a high omega 3 intake will result in halving the 30 <> 1 omega 6 to omega 3 2 yrs later to 15 to 1
and 4 yrs after you'll be down to 7/8<> 1 omega 3 and will at bit of luck and persistance after 5 yrs you'll be about the level omega 3 is NOT BEING DISPLACED by excess omega 6. "

OMG! I didn't know that!

DHA is a really critical nutrient, one that can be found only in marine sources. While there are suggestions that your body can convert the Omega-3 fatty acids from flax, hemp, etc. to DHA, the studies show almost no change in blood levels of DHA.

Your brain is 60% fat, half of which is DHA. And most of the brain is formed in utero, so DHA is especially important for pregnant women during the development of the child.