Queen of the Meadow 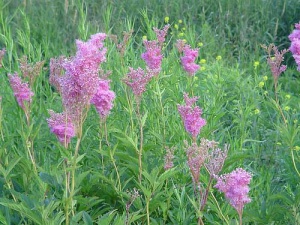 Queen of the Meadow is a perennial plant commonly found growing in low dry wooded areas or meadows throughout the United States. It has a woody root with many long dark brown fibres, which send out one or more solid green, but sometimes purplish stems which can grow up to six feet high. The leaves are oblong, coarsely serrate and are grouped three to six in a whorl. The root and leaves are used for their medicinal properties.

Other common names for this herb are gravel root, trumpet weed, Joe-Pye weed and kidney root.

This herb was a popular remedy among many Indian tribes. The name "Joe-Pye" was given to it in honor of a New England Indian healer who used it to induce profuse sweating and cure typhus.

Queen of the Meadow is used for many urinary tract problems, as a diuretic, it helps dissolve gravel or stones in the urine, also the systemic chrystalline deposits often found with gout, rheumatism and arthritis. It also helps eliminate uric acid deposits in the joints and for edema. It is valued as it is very soothing for the urinary mucous membranes.

This herb is also known as gravel root because it is very effective in loosening, dissolving and eliminating gravely sediment in the kidney passageways. It can encourage a reliable flow of urine in cases where the urge is present but the release is difficult.

Women use Queen of the Meadow for pain relief in the uterus during menses.

Below is a listing of some of the conditions that can be treated with Queen of the Meadow.