Difference between revisions of "White Willow" 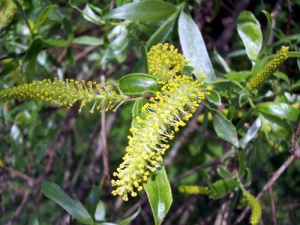 White Willow is native to Europe and parts of Asia. It's a deciduous tree that grows quickly, but is short-lived due to diseases. It's also commonly known as European Willow. The bark is used for its medicinal value.

White Willow Bark is rich in phenoic glycosides, salicin, picein and triandrin, with esters of salicylic acid and alcohol. Tannins, p-coumaric acids and flavonoids are also present. This herb is most popular for use as an analgesic, anti-inflammatory, blood-thinner and general tonic.

The salicin in the bark is an analgesic compound from which salicylic acid, and later acetylsalicylic acid (aspirin) were derived. White Willow is the natural form and origin of modern day aspirin. Although aspirin works faster, this herb is the better choice for avoiding stomach upset/irritation especially in cases of chronic pain conditions such as rheumatoid arthritis.

White Willow Bark has been successfully used for thousands of years in the treatment of inflammation and associated pain. It's been a well respected ancient remedy for rheumatism, gout, headaches and fever. This herb is also believed to reduce the risk of colon/stomach cancer and heart disease. It's proven to be beneficial for women who experience uterine cramping.

White Willow should not be used by those on blood-thinning medications, or who have ulcers. Similar to aspirin, there's a possibility of causing Reye Syndrome if given to children with fever due to chicken-pox, colds or flu.