Difference between revisions of "Apple Fruit" 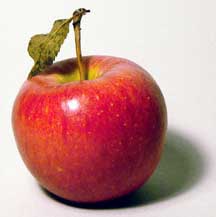 Apple
The saying "An apple a day keeps the doctor away" is not a completely false claim and actually holds medically proven health benefits. This well known saying shows the health effects of the fruit discovered in 19th century Wales. The apple is a round shaped fruit of an apple tree. A part of the species, Malus domestica, in the rose family, apples are one of the most commonly cultivated tree fruits in the world. Originating in Western Asia and still found there today, apples vary in size, yield and time. In fact, there are 7,500 known types of apples with a variety of characteristics worldwide. Up to 55 million tons of apples were grown worldwide in 2005 valuing at approximately $10 billion, 35% of which was produced by China. Second to China is the USA with more than 7.5% followed by Iran, Turkey, Russia, Italy & lastly India.

Studies have shown that apples may reduce the risk of colon cancer, prostate cancer and lung cancer among other benefits. In contrast to other fruits and vegetables, apples contain low amounts of vitamin C, but are a rich source of other antioxidants and minerals. The fiber content, while less than in most other fruits, helps regulate bowel movements and may therefore reduce the risk of colon cancer. This fruit may also help with heart disease, weight loss, and cholesterol regulation. They are a good source of fiber making the fruit an ideal snack for anyone trying to lose or monitor their weight. There is evidence to suggest that in vitro apples contain phenolic compounds which may be cancer preventative and protective. The main phenolic phytochemicals in apples are quercetin, epicatechin, and procyanidin B2. As well as these benefits, apples have been found to improve cognitive functions and prevent the decline in brain performance caused by deficiencies and time. This has led to theories that apples help prevent and reduce the risk of Alzheimer's Disease and Dementia.

Apples may be juiced, canned or eaten raw. They are milled to create apple cider, crushed for apple sauce and filtered for apple juice among other uses.The juice can later be fermented to produce alcoholic cider, vinegar or ciderkin. By further distillation, many other alcoholic beverages can be created such as applejack, apple wine and Calvados. Apple seed oil and pectin are also easily made. Apples are a main ingredient in a variety of dessert treats such as apple tart, apple cake, apple pie, apple crisp, apple crumble, and caramel apples. They can be baked, stewed, covered or dipped in a variety of sweet sauces and nuts for a simple delicious treat. They are easily dried or preserved in cans for later use. Aside from canning apples, they may also be blended into a wide variety of apple sauces, made into apple butter, apple jelly or used in main meal dishes. Some people even baste them in honey and grill them during the summer for a crunchy and pleasantly unique taste.