Difference between revisions of "Alzheimer's Disease" 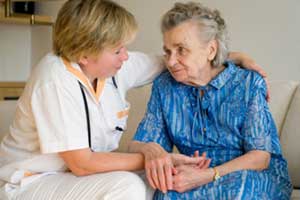 Most commonly affecting those over the age of 65 years, Alzheimer's rarely affects the young, but in rare cases, early-onset Alzheimer's can occur. Alzheimer's disease seems to have a unique path for each patient that suffers from it, but there are various common symptoms such as stress and memory troubles with recently occurring events or facts. Usually a complete behavioral assessment and other cognitive tests are carried out if one is suspected of having this complex disease which is usually followed by a brain scan for confirmation.

As the disease progresses, other symptoms occur such as mood swings, anger and aggression, confusion, language break down, withdrawal from daily life and mental involvement with others and long term memory loss. Ultimately, bodily functions are loss which ultimately leads to death.

The causes of Alzheimer's are complex and not well understood in research studies. Research shows that this disease is associated with various abnormal tangles and plaques in the brain and that damage can occur from 10 to 20 years before any issues become evident. Tangles and plaques begin to form deep in the brain and, over time, healthy neurons begin to work less effectively. As the disease progresses, these neurons lose their ability to communicate with one another and eventually die. The damage spreads to the hippocampus, an area of the brain essential for the formation of memories, and various affected areas of the brain begin to shrink and die.

The main causes of Alzheimer's seem to be genetic, lifestyle and environmental factors that may cause a series of complex events in the brain over a long time period. Each of these factors varies with each patient, therefore each of their symptoms, causes, treatment and means of prevention is different.

Alzheimer's is a very complex disease and there is yet to be a preventive method of cure for it. Current treatments focus on assisting patients with slowing, delaying or preventing this disease or maintaining mental functions and managing behavior symptoms for those already affected. Ongoing trial treatments also include cardiovascular treatments, antioxidants, cognitive training, diabetes treatments, physical activity, and immunization therapy.

There is currently no evidence supporting any practices or methods to prevent this disease due to inconsistent results. However, various studies infer that relationships between specific factors such as cardiovascular health, diet, intellectual activities and pharmaceutical products all play a role in the development of Alzheimer's. Trials have been conducted with light evidence to suggest that various vitamins, minerals and diet lifestyles may be associated with a lower risk in developing Alzheimer's disease as well as the long term use of non-steroidal anti-inflammatory drugs.